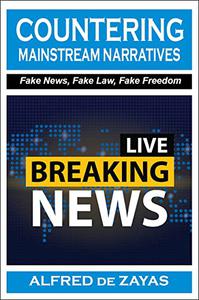 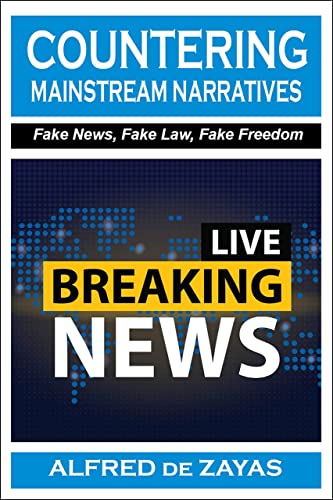 Faced with the startling and blaring unity of global Western mainstream messaging, the public has become ever more distrustful of the MSM narratives―and with good reason. Authoritative sources have begun pushing back and offering cogent challenges to these proclaimed truths―and in turn, the digital gatekeepers have been increasingly cracking down on what they regard as unwelcome alternative views―irrespective of the stature of the persons providing them.
In this collection of essays, former UN Independent Expert on International Order, Professor Alfred de Zayas, takes mainstream disinformation, fake news, censorship and self-censorship head-on. Stressing the importance of access to information and to a genuinely pluralistic spectrum of views as indispensable to every functioning democracy, de Zayas provides an insightful counter-narrative, shedding light on the key issues facing humanity today.
This collection of essays spans a broad spectrum of issues, including

• the need to overhaul the human rights apparatus,
• the weaponization of human rights against geopolitical rivals,
• the instrumentalization of domestic and international law for purposes of “lawfare”, initiatives for world peace,
• disarmament for development,
• the sustainable development goals,
• the information war, what and whom to believe,
• the democratic function of whistleblowers,
• the persecution of human rights defenders like Julian Assange and Edward Snowden,
• the destructive role of the military-industrial-financial complex,
• the elevation of NATO to cult status, so that we must believe its narratives as a matter of faith,
• the demonization of Russia and China and the consequences of incitement to hatred in escalating tensions world-wide
• the Beijing Olympics
• the evidence-free allegations of “genocide” in Xinjiang, and not least,
• the war in Ukraine.

The essays also explore moral, legal and philosophical questions on law and justice, law and punishment, and the rule of international tribunals.

Drawn from de Zayas’ recent contributions to the respected online news journal, Counterpunch, Countering the Mainstream Narratives provides an exceptional guide to unwinding the fakery that engulfs us.

De Zayas’ essays and op-eds have also been published in the Guardian, The Independent, Inter Press service, Truthout, Counterpunch, as well as in the Tribune de Genève, Le Courrier, die Welt, die Frankfurter Allgemeine Zeitung and other newspapers.