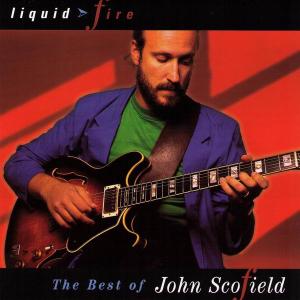 In a neatly symmetrical fashion, Gramavision chose two tracks from each of Scofield's half-dozen albums for the label, sequenced them chronologically, cross-faded or ran many of them together, and ended up with an exciting hourlong summary of his mid-'80s output (would that more best-of albums be assembled with such consistency). After the jagged electric jazz-rock of the first two albums, Electric Outlet and Still Warm, "Make Me" and "The Nag" from Blue Matter inject a funk element into the Scofield bag, which becomes even nastier on "Wabash" (from Loud Jazz) before resolving into the potently jazzier direction of Flat Out ("The Boss's Car" is a gas). Amidst all of the electric bluster and energy, there is a dignified, quietly bluesy Scofield solo take on "Georgia on My Mind" (from Pick Hits Live) at the dead center of the CD… 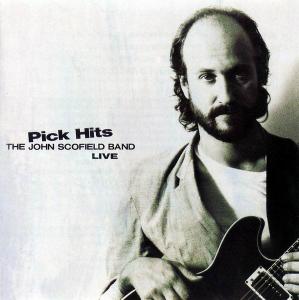 One of guitarist John Scofield's best sessions for Gramavision, this live date features his regular band of the period, a quartet with keyboardist Robert Aries, electric bassist Gary Grainger and drummer Dennis Chambers, who had been playing together regularly for a year at that point. The close communication between the musicians on such numbers as "Pick Hits," "Protocol" and "Blue Matter" could only come from the players fully understanding each other's musical personalities. The music, electric but adventurous, funky but definitely exploratory jazz, is difficult to describe, but easier for Scofield's fans to enjoy. 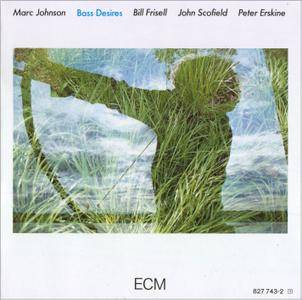 The pairing of electric guitarists Bill Frisell and John Scofield had to be one of the most auspicious since John McLaughlin and Carlos Santana. Acoustic bassist Marc Johnson's stroke of genius in bringing the two together on Bass Desires resulted in a sound that demonstrated both compatibility between the guitarists and the distinctiveness of the two when heard in combination. Add drummer Peter Erskine and you had a bona fide supergroup, albeit in retrospect a short-lived one, before Frisell and Scofield would establish their own substantial careers as leaders. The guitarists revealed symmetry, spaciousness, and a soaring stance, buoyed by the simplicity of their rhythm mates. This is immediately achieved on the introductory track, "Samurai Hee-Haw," as hummable, head-swimming, and memorable a melody as there ever has been, and a definite signature sound. 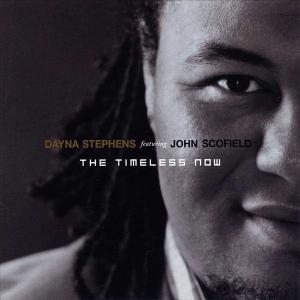 Dayna Stephens is a contemporary jazz tenor saxophonist whose sound is roundly hailed as warm, effusive, and sophisticated, much like his admitted influences Joe Henderson and Wayne Shorter. As a performer in the neo-bop post-Michael Brecker tradition, he'll also be compared in blindfold tests alongside Joe Lovano, Bob Mintzer, Chris Potter, and Seamus Blake. Nonetheless, Stephens has come out of the gate with a collection of original modern mainstream compositions backed by some established heavyweights of American music to support him. "Contagious" is the best track on the date to feature the young and brilliant pianist Taylor Eigsti, a chip off the ol' Chick Corea block. His complex, probing intricate rhythm changes spur the band on to a high level, while in a modal and beautifully spiritual area during the standard "But Beautiful," Eigsti coaxes Stephens to a cozier radiance tempered by restraint… 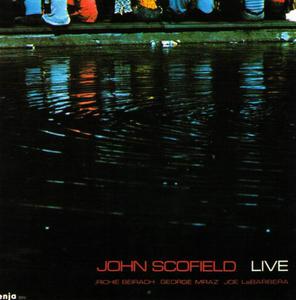 This set features some high-quality post-bop guitar playing by the immediately distinctive John Scofield. The four lengthy selections - three originals and an over 15-minute rendition of "Softly as in a Morning Sunrise" - find Scofield, pianist Richie Beirach, bassist George Mraz and drummer Joe LaBarbera really stretching out. The music holds one's interest throughout and shows how mature a player the guitarist was even during his early pre-Miles Davis period. 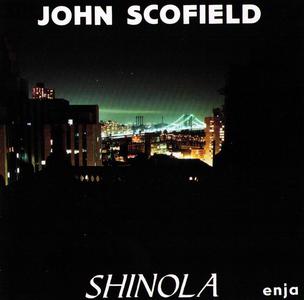 Shortly before joining Miles Davis' group, guitarist John Scofield recorded this passionate trio set with electric bassist Steve Swallow and drummer Adam Nussbaum. Much of Scofield's playing here is quite rock-ish although he does show off his jazz chops on Jackie McLean's "Dr. Jackle." The frequently intense music has plenty of fiery moments. 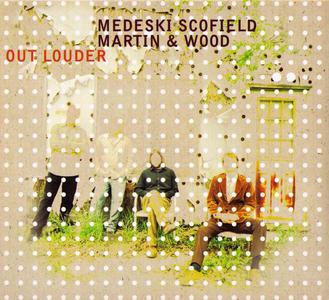 Out Louder reunites keyboardist John Medeski, drummer Billy Martin, and bassist Chris Wood with guitar great John Scofield, who employed the trio on his 1997 A Go Go album. That record opened the creativity gates for both the trio and Scofield, who fed off and goaded each other into territories neither party had previously gone separately. Out Louder isn't so much a rematch as an upgrade. Both Scofield and MMW have continued to explore in the near-decade since A Go Go, and they come to this project with a greater understanding of their collective abilities as well as a willingness to explore the possibilities further. Not unexpectedly, the four musicians work hard here, but they also have a ton of fun. The opening track, "Little Walter Rides Again," serves notice that this isn't going to be an exercise in showing off but rather four envelope-pushing musicians picking each other's brains and seeing what they find… 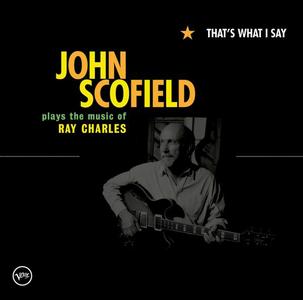 With John Scofield, a big part of the fun is never knowing what the guitarist will do from one album to the next. He might provide an album that is abstract and cerebral, or he might come up with something funky and groove-oriented; That's What I Say: John Scofield Plays the Music of Ray Charles is a perfect example of the latter. Featuring well-known guest vocalists who include Dr. John, Mavis Staples (as in the Staple Sisters), Aaron Neville and John Mayer, this tribute to the late Ray Charles is definitely one of Scofield's more commercial projects - which isn't to say that he shouldn't be proud of the album. Commercialism isn't necessarily a bad thing as long as it is tastefully done, and That's What I Say is a tasteful effort that finds Scofield fluctuating between instrumental soul-jazz and vocal-oriented soul… 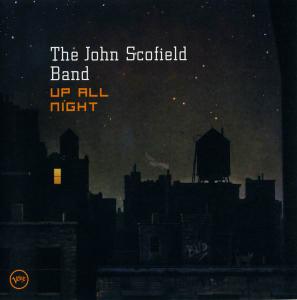 It isn't surprising that John Scofield spent some time in Miles Davis' employ. Like that innovative trumpeter, Scofield has always had a restless spirit. One never knows what to expect when a new Scofield album arrives; Up All Night, it turns out, pretty much picks up where its predecessor, Überjam, leaves off. Like Überjam, Up All Night is a fusion effort that manages to be intellectual and funky at the same time. Of course, intellect and funkiness don't automatically cancel one another out - Davis demonstrated that on many occasions. But some artists have a hard time balancing the two in an effective way… 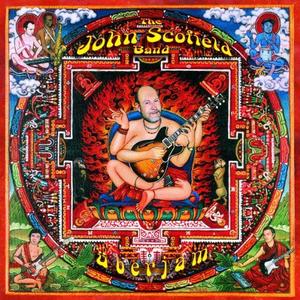 In the jazz world, there are artists who are consistent but predictable and artists who are unpredictable but inconsistent. John Scofield, meanwhile, is an impressive example of a jazzman who is both unpredictable and consistent. You never know what the risk-taking guitarist will do from one album to the next, but he rarely provides an album that is flat-out disappointing. Überjam is a major departure from 2000's Works for Me, the Verve date that preceded it. While Works for Me is essentially a straight-ahead post-bop outing and employs acoustic-oriented players, like pianist Brad Mehldau and bassist Christian McBride, Überjam is pure, unadulterated fusion. This album always has a jazz mentality - Überjam is as spontaneous, free-spirited, and uninhibited as any bop session that was recorded in Rudy Van Gelder's studio in the '50s… 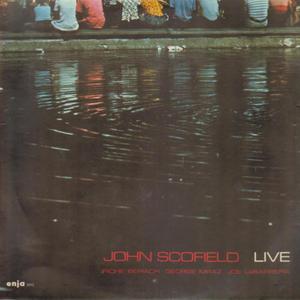 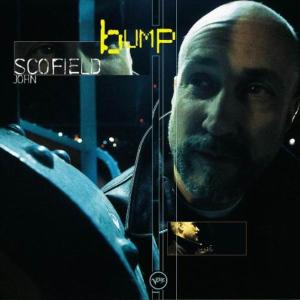 John Scofield continued to use his Verve Records contract for unusual outings - like this one, his third release for the label, following the acoustic disc Quiet and A Go Go (which featured Medeski, Martin, and Wood). On Bump, he retained bassist Chris Wood and added Tony Scherr and Kenny Wollesen (the rhythm section from Sex Mob), keyboardist Mark De Gli Antoni from Soul Coughing, and drummer Eric Kalb and conga player Johnny Durkin from Deep Banana Blackout. Such sidemen allowed him to delve even more deeply into the second-line funk he had explored earlier in his career; indeed, "Three Sisters," the leadoff track, sounded like something Allen Toussaint might have produced for the Meters in the early '70s… 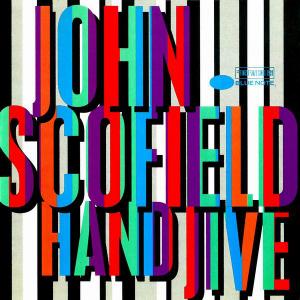 Guitarist John Scofield and tenor saxophonist Eddie Harris make a very complementary team on this upbeat set of funky jazz, for both have immediately identifiable sounds and adventurous spirits. Along with a fine rhythm section that includes Larry Goldings on piano and organ, Scofield and Harris interact joyfully on ten of the guitarist's originals. 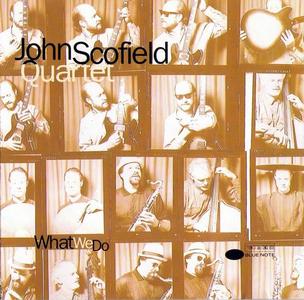 Guitarist John Scofield contributed all nine originals on this album and teams up with up-and-coming tenor saxophonist Joe Lovano, bassist Dennis Irwin and drummer Bill Stewart for a set of consistently stimulating music. The interesting blend between Scofield and Lovano, the consistently inventive solos, and the unpredictable material - which falls loosely into the post-bop area but is really unclassifiable - make this a CD worth listening to several times. 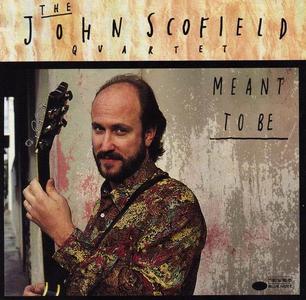 Meant to Be features guitarist John Scofield's 1990 pianoless quartet on 11 of his compositions. During the best selections (such as "Big Fan" and "Mr. Coleman to You") one can hear the influence of not just the original Ornette Coleman Quartet but the Keith Jarrett/Dewey Redman Quintet. Joe Lovano's increasingly original tenor sound (mixing together John Coltrane, Dewey Redman, and even Eddie Harris on this set) works well with Scofield and the tight but loose rhythm section (bassist Marc Johnson and drummer Bill Stewart). "Eisenhower" (a slightly tongue-in-cheek, boppish romp) and "Some Nerve" (which uses New Orleans parade rhythms) are also memorable performances. The colorful and enjoyable set is modern mainstream music of the 1990s, stretching ahead while holding on to the roots of hard bop, funk, and fusion.