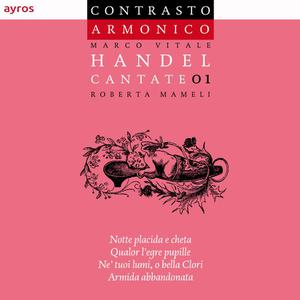 Handel’s cantatas represent an important musical repertoire that until recently has been little known. Consisting of about 100 separate works, most were written over a period of a few years for private performance in Italy. They range from musical miniatures containing only two arias connected by recitative and accompanied by continuo to larger works with named characters, a dramatic story, and rich instrumental forces. Telling more often than not about the pangs of love, these are intimate works, with texts frequently written by (and sometimes about) members of the privileged audience for which they were composed. 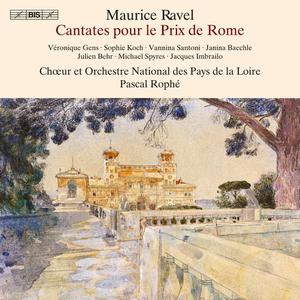 Between 1803 and 1968, the Grand Prix de Rome marked the zenith of composition studies at the Paris Conservatoire. In Maurice Ravels time the competition included an elimination round (a fugue and a choral piece) followed by a cantata in the form of an operatic scena. The entries were judged by a jury which generally favoured expertise and conformity more than originality and Ravels growing reputation as a member of the avant-garde was therefore hardly to his advantage, and may explain why he never won the coveted Premier Grand Prix, and the three-year stay at Romes Villa Medici that went with it. 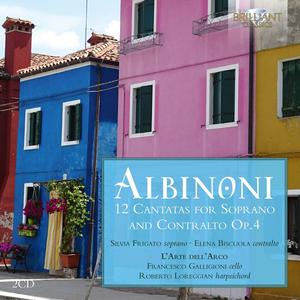 If we think of Albinoni beyond the ubiquitous and apocryphal Adagio (not so much arranged as concocted by a 20thcentury musicologist, Giazotto), we may remember collections of lively oboe and violin concertos, maybe also some trio sonatas and works featuring solo flute and trumpet. But Albinoni, the composer of cantatas and operas?
This quartet of Italian musicians puts the record straight with a new recording of secular cantatas. In fact Albinoni married a soprano, Margherita Raimondi, and apparently had a fine singing voice himself. 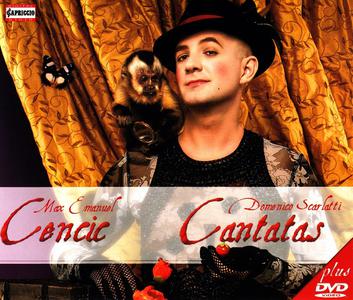 Domenico Scarlatti is almost exclusively associated with his 600 sonatas for keyboard. But, as with most composers of his time, he also contributed to other genres including music for instrumental ensemble and vocal music. In the early stages of his career, when he was still in Italy, he composed several operas. As there was a close connection between the opera and the chamber cantata it come as no surprise that his output includes several specimens of the latter genre, which was extremely popular throughout Europe. 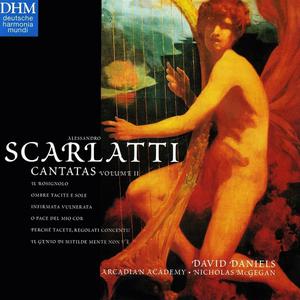 By the eighteenth century, Palermo-born Alessandro Scarlatti was the most widely performed Italian composer of vocal music having written more than sixty operas and well over a hundred cantatas. The cantata, more concentrated than opera, was considered at that time as the higher artistic form. Scarlatti was extremely prolific and many of his works including cantatas still remain unrecorded. 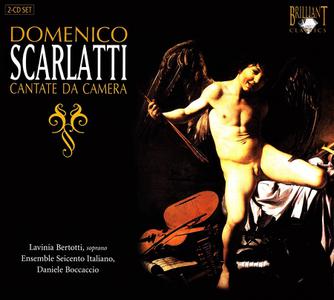 During his lifetime, from his Neapolitan years to his Spanish sojourn, Domenico Scarlatti cultivated the “cantata” genre, composing at least about sixty works – those of uncertain attribution and his Serenades excluded. Other cantatas are likely to emerge once the uncatalogued funds are systematically scanned. Since in those years the cantata was a genre on the wane, this high number is revealing of Scarlatti’s uninterrupted link with the baroque tradition, an age in which the cantata had reached its climax as an extremely refined genre, the place for daring experimentation, and exquisite writing, the appropriate gym for high craftsmanship, as expected by the elitist audience for which it was intended. The manuscripts date from 1699 to 1724. 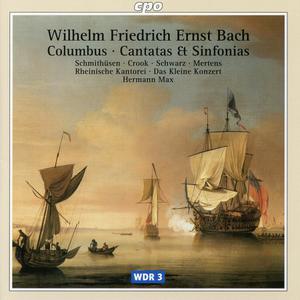 J.S. Bach’s talent seems to flow in his grandson’s blood at least as strongly as in any of his sons. Wilhelm Friedrich Ernst Bach’s two symphonies (as well as the vocal works featured here) inhabit the sound-world of mid- to late Mozart, albeit without the brilliance (in every sense of the word). This Bach’s wind writing is tasteful, and makes good use of the (then) newly-arrived clarinet. The Andante of the C major symphony is quite beautiful, with a dolefully sweet oboe solo throughout the movement. The period strings of Das Kleine Konzert are lively, clean, and in tune, although the violin soloist is not quite up to the rapid passage-work at the end of the G major symphony. 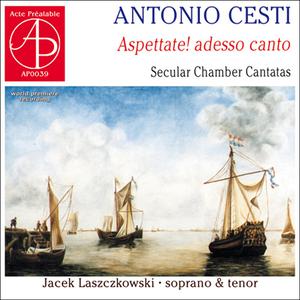 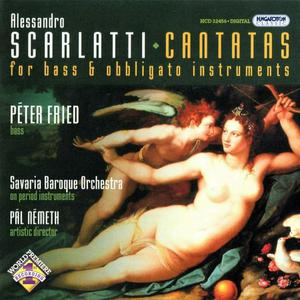 Savaria Baroque Orchestra under the artistic direction of Pál Németh have been among the leading interpreters of Baroque music in Europe for 25 years, and bassist Péter Fried can also look back on an impressive international career. The instrumentalists once again offer an excellent, stylistically adept, technically flawless performance, which is also characterized by the successful balance between the individual instruments. 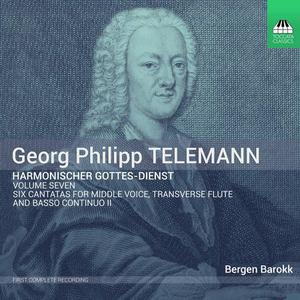 This is the seventh part in the first complete recording of the 72 cantatas in Georg Philipp Telemann’s collection Harmonischer Gottes-Dienst, published in Hamburg in 1726 – the first complete set of cantatas for the liturgical year to appear in print. The cantatas are designated for voice, an obligato instrument (recorder, violin, transverse flute or oboe) and basso continuo, and generally take the form of two da capo arias with an intervening recitative. Although intended for worship, both public and private, Telemann’s cantatas are a masterly blend of tunefulness with skilled counterpoint and vocal and instrumental virtuosity. 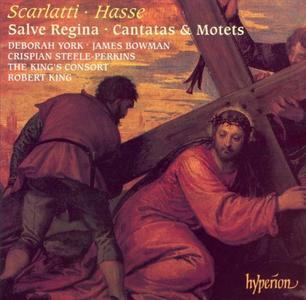 In the eighteenth century the cantata was considered to be the supreme challenge for a composer's artistry. Here are recorded three fine examples from the enormous corpus of such works by Alessandro Scarlatti, two for solo voice with continuo, and one which includes a particularly demanding part for obbligato trumpet, faultlessly played by Crispian Steele-Perkins. 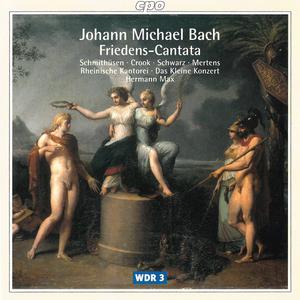 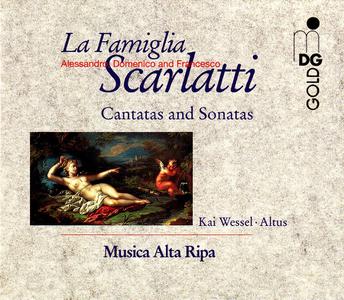 Alessandro Scarlatti’s 600-plus cantatas make him one of the more prolific exponents of a form that flourished in Italy in the late 17th and early 18th centuries. Though he’s generally credited with standardising cantata form, his early essays in the genre were often imaginatively varied, as is shown by the delectable Arcadian Academy disc. Rather than the usual two or three da capo arias alternating with recitatives, the four secular cantatas here boast opening sinfonias, closing ariosos, large numbers of movements and a range of aria-types. Bella madre dei fiori, for example, experiments with a mix of poetic strophes and instrumental ritornelli. Even so, this formal ingenuity would be of limited interest were it not for Scarlatti’s gifts for attractive melody and sensitive illustration of his texts. 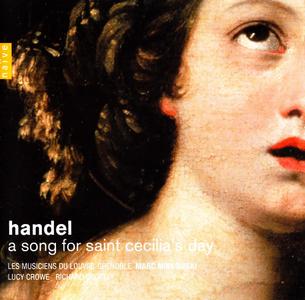 Let's not waste time: get this for soprano Lucy Crowe's voice, for her performance of "What passion cannot Music raise", for her "The soft complaining flute"–and don't forget the glorious "But oh! What art can teach". Okay–just get this for the magnificent Crowe, whose golden, ringing tone and impeccable, uninhibited technique sets Handel's arias ablaze in vibrant, scintillating glory, relegating any recorded competition to second-class status. (Listen to that long-held, stratospheric note in the final chorus, on the words "The trumpet shall be heard on high"–on high, indeed; it seems like Crowe could have sustained it forever!) To sing Handel requires technical ease and comfort, range and unreserved explicatory ability–and in this, and in her complete habitation of the world of Handelian style Lucy Crowe is unsurpassed. 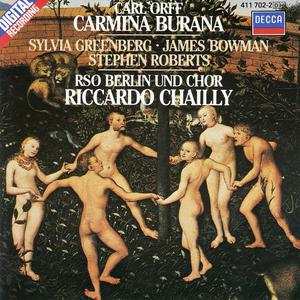 Carl Orff’s Carmina Burana is probably the most frequently performed choral work of the 21st century. The name has Latin roots – 'Carmina' means 'songs', while 'Burana' is the Latinised form of Beuren, the name of the Benedictine monastery of Benediktbeuren in Bavaria. So, Carmina Burana translates as Songs Of Beuren, and refers to a collection of early 13th-century songs and poems that was discovered in Beuren in 1803 – although it has since been established that the collection originated from Seckau Abbey, Austria – and is now housed in the Bavarian State Library.