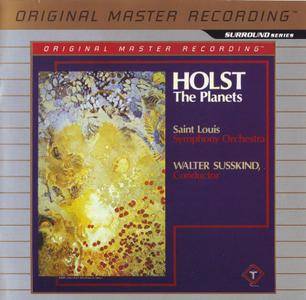 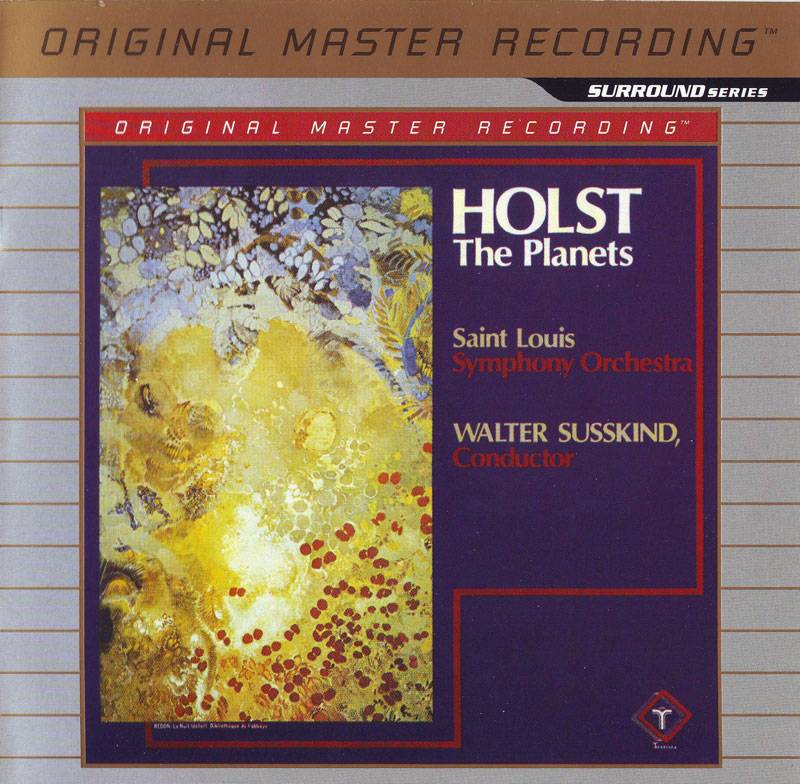 The Planets, composed between 1914 and 1916, is a suite of seven movements. Holst's starting point for the music was the astrological character of each planet, though his interest in astrology went no deeper than its musical suggestiveness. His daughter wrote that once the underlying idea had been formulated 'he let the music have its way with him'. There was, therefore, no programme for the suite, and the composer himself pointed out that it has no connection with the deities of classical mythology. The many clues to the meaning of the music are the subjects of the individual movements.

MARS, the bringer of war. Three musical ideas are used to create this martial piece: (1) a brutally rhythmic figure of five beats relentlessly hammered out, (2) a principal theme in triads moving by chromatic steps with no true harmonic purpose; (3) a second theme consisting of a tattoo in the tenor tuba answered by a flourish of trumpets. There is no glory, no heroism, no tragedy in this music. It is entirely inhuman. Not even death is in it, for Mars is as insensitive to death as to life. War is a senseless, mechanised horror is Holst's real subject here.

VENUS, the bringer of peace. She is announced by four ascending notes in the solo horn and a sequence of converging chords in the flutes and oboes. Most of her music lies, symbolically, in the middle and upper registers of the instruments; and harps, celestes, and glockenspiel further characterise her heavenly nature. In addition there are beautiful melodies for her in the solo violin and oboe. Though this is music of surpassing serenity it is not simple in harmony, texture or orchestral sonority. One cannot help but observe how fitting it is that the state of peace be described in complex terms, in contrast to the complicity of the depiction of war.

MERCURY, the winged messenger. This is the quickest and, in duration, the shortest movement of the suite. Aside from its speed, however, its particular quality comes from the opposition of two simultaneous keys and two simultaneous rhythms. The two keys, which are sounded in the very first bar, are B-flat and E (which, being separated from one another by the interval of the tritone, have no note in common). The two rhythms arise out of different groupings of six beats, the first being ONE-two-three-FOUR-five-six, the second being ONE-two-THREE-four-FIVE-six. This opposition of contrasting patterns is one of Holst's principal characteristics, and other examples of it can be found not only in The Planets but abundantly throughout his works.

JUPITER, the bringer of jollity. The exuberance of this movement shows itself not only in its tempo and rhythm but also in the multiplicity of subjects. You can count four, five or six of them, depending on whether you divide the first two into their component parts - they do behave like independent themes. Jupiter might well be designated as 'the English movement' because it shows how profoundly Holst was influenced by the folk music of his country. Certainly this is rustic English, music for a fair; there are crowds of people in it and infinite good spirits. The grand tune that ends the parade of themes has become the setting for a patriotic hymn with the words 'I vow to thee my country'.

SATURN, the bringer of old age. Unlike the previous movements, which are static in the sense that each depicts various aspects of a single trait, this one moves through a series of 'events' that bring the music to conclusions not envisioned at the beginning. There is a profound hollowness and sense of defeat in the harmony of the opening chords, and an even deeper despair in the motif sounded beneath them by the double basses. But the elderly voice of wisdom is soon heard in the B-minor theme for the trombones, and at the end the mood is one of acceptance, reconciliation and consequent serenity.

URANUS, the magician. You can take as the figure of Uranus almost any magician you have ever seen in opera, drama or vaudeville - preferably one with the tall pointed hat studded with stars, the flowing blue robe with voluminous sleeves, and the silver want. He is invoked by Holst with a triple invocation, and he begins to show his tricks immediately. His repertoire is vast and astonishing and at the climax of his demonstration he struts around pompously to a pompous tune. By way of encore he makes some mysterious incantations, suddenly (one guesses from the music) envelops himself in flames - and disappears.

NEPTUNE, the mystic. This movement is, if any music can be, the disembodied spirit of sound. Themes are practically non-existent; in their place are fragments of melody and harmony, all manipulated at the very lowest dynamic level and in the most attenuated orchestral sonorities. Almost imperceptibly a double chorus of women's voices enters on a high G, sustained through a dozen bars. The singing continues, without words, embedded in a diaphanous veil of orchestral sound. Even this dies away, and the voices are left alone to intone a cadence over and over again with ever diminishing tone , until it is consumed in silence.


Taken from record sleeve, published by Music For Pleasure, and EMI, with the catalogue number MFP 2134. The recording was made with the Los Angeles Philharmonic Orchestra and the Women's Voices of the Roger Wagner Chorale, conducted by Leopold Stokowski.

Performed by The Saint Louis Symphony Orchestra and conducted by Walter Susskind, Mobile Fidelity Sound Lab's (MFSL) multichannel debut of Holst's The Planets is a remarkable and stunning revelation within the aural cosmos. Utilizing MFSL's heralded GAIN 2 (Greater Ambient Information Network) proprietary mastering process, the compelling contrast between the thunderous, enraged "Mars" and the refined pomp and beauty of "Venus" is unveiled in spectacular sonic splendor. Gustav Holst's deep understanding and inspired interpretation of Astrology, Mythology, and the Greek influenced "Music of the Spheres" is illustrated here in meticulous, spacious surround sound on the most technologically advanced sound reproduction media format to date - the Ultradisc UHR Surround SACD. The fact is that MFSL's exploration of the sonic universe has often been likened to NASA's research in space - utilizing the greatest technological achievement possible to unveil greater mysteries. So it stands to reason that Mobile Fidelity Sound Lab, who illuminated The Dark Side of the Moon with its definitive versions of that classic album, will now unveil the The Planets… 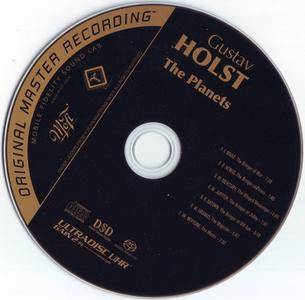 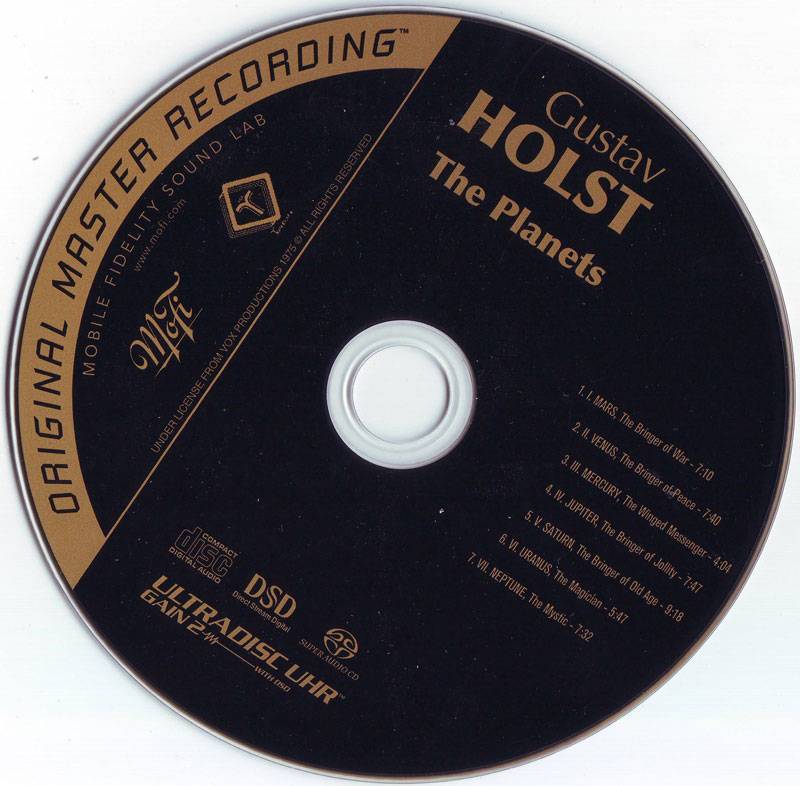 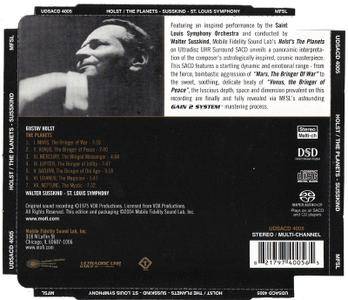 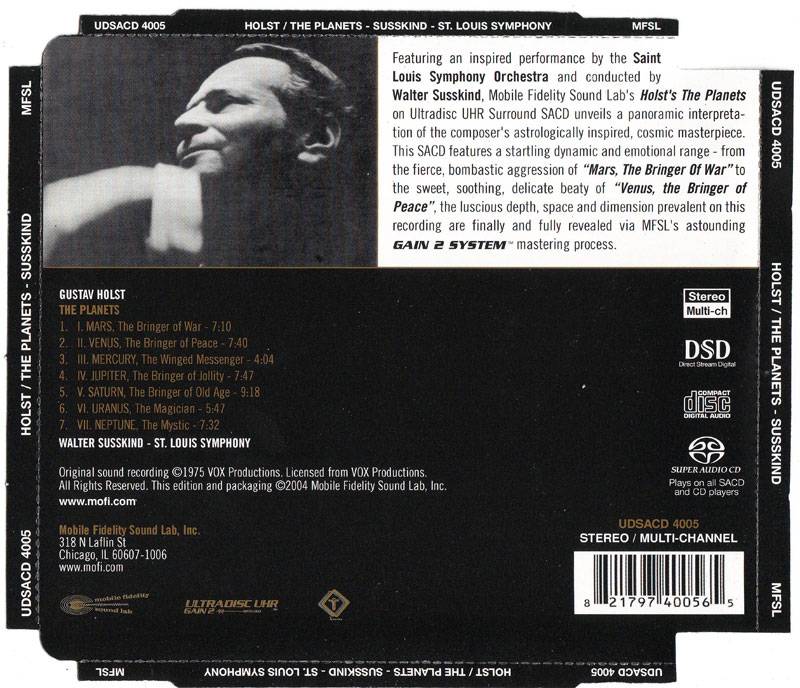 All thanks go to the original releaser