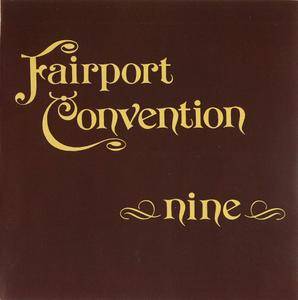 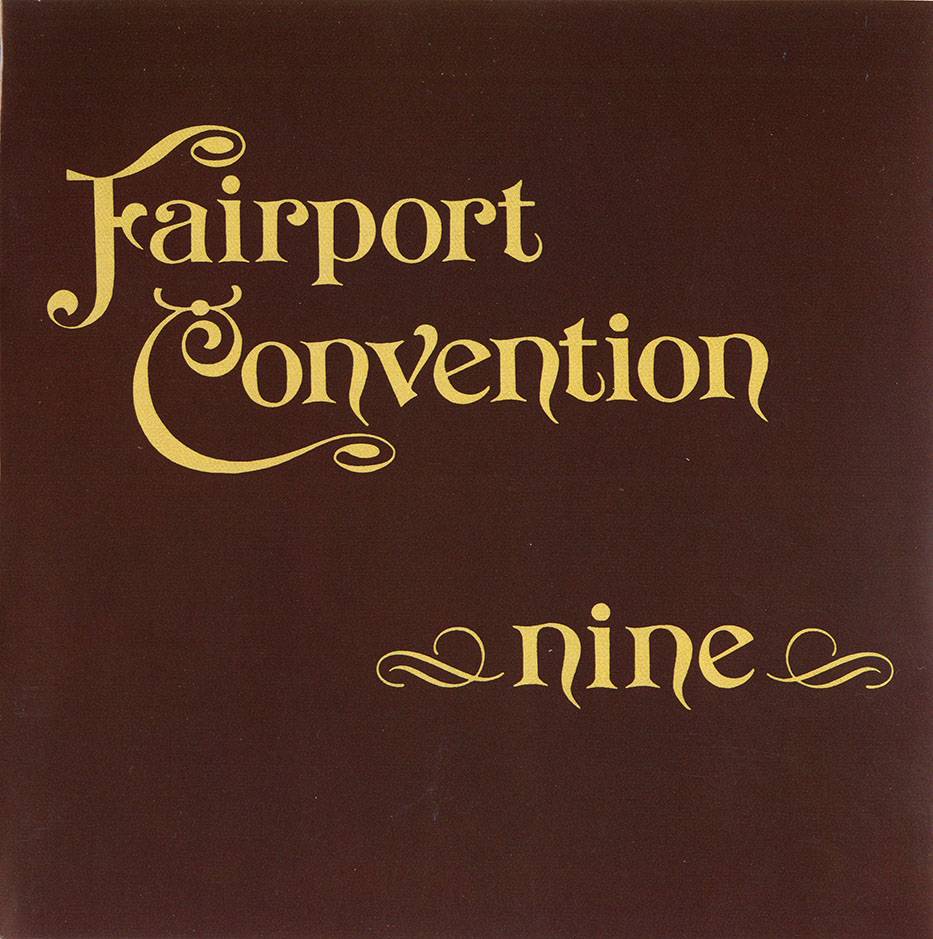 Nine is the ninth album by the British folk rock group Fairport Convention, released in 1973. 2005 Remastered re-issue. Bonus Tracks include 'The Devil in the Kitchen' (Fiddlestix), 'George Jackson' (Live), 'Pleasure and Pain' (Live) and 'Six Days on the Road' (Live).

If you were to rate the albums released by Fairport Convention in the 1970's, the number one in popularity would no doubt be " Full House " and " Rising For The Moon " would weigh in a strong second place. But Right between these two fine releases comes a Disc called " Nine " and it's mark in the history of this band has been understated to say the least. Nine has never been recognized as what it really is…the most important release by this band during the 70's.

The depatures of Richard Thompson & Simon Nicol in 1971 made the future of Fairport seem all but doomed. It was up to Dave Swarbrick and Dave Pegg to keep the boat afloat. The eighth record " Rosie " went down like a "lead Balloon" but it got the two Dave's together with Trevor Lucas and Jerry Donahue to bring this Folk-Rock Band back from near death. The result of all this talent (not forgetting Drummer Dave Mattacks) was "Nine".

With Jerry on board the band gained a Guitarist who could hold his own along side Richard. But even better with the addition of Trevor, the band had it's best vocalist and songwriter since 1969 when Mrs. Lucas (Sandy Denny) was onboard. There were no ego clashes this time out, and the Chap's were enjoying it all again and stormed the stages of the world doing it.

There are PLENTY of great tunes on "Nine" and it all begins with "The Hexhamshire Lass" a brisk opener sung by Swarb. "Polly On The Shore" is Trevor's most memorable moment on Record and it does sound just as good 32 years later. "To Althea From Prison" features another great vocal from Swarb and some of his best fiddle ever (one of the Great Overlooked Songs of this Band's history). My favorite of this batch is Trevor's "Bring 'Em Down", in concert this song became Epic with "Cosmic Fiddles From Jupiter" often bringing things to an conclusion before the fifteen minute mark on the clock…another Great Overlooked Tune, One of the very best things here. Check out the CD "Before The Moon" for that Space-Journey..

What Jerry Donahue brings to "Nine" is a Guitar and a lot of American Country & Western overtones as featured in "The Cherokee Shuffle" and "Tokyo" instrumentals and the song "Pleasure & Pain" which sounds like a British Burritto Brothers (way different territory for our heroes) but still it works. And the closer, Trevor's "Possibly Parsons Green" put's the Rock back into Folk-Rock, another Brillant Track.

This Remaster features four Bonus Tracks and they are welcome. First up is the Austrailian single version of "Fiddlesix" with Banjo and a 50 piece orchestra (don't laugh, it's good). Bob Dylan's song "George Jackson" get's a wonderful vocal from Trevor and the backing Mandolin (Peggy?) sounds really nice as well. After some Stage-Clowning a live "Pleasure & Pain" doesn't differ from the Studio Version much but the harmonies are "Spot-On".

It all comes to a close with "Six Day's on the Road" that put's us right back in Gram Parson Land with a rousing vocal by Trevor. Sandy would be taking over the Singing on this one and leading the Band within a few more months but this version is still just "the boy's" and you can hear how much fun the are having.

That's "Nine", a real fine record and the Remaster makes it sound Brand New. With the Bonus Tracks added in the running time is 56 minutes. The Lyrics are included, and four pages of notes from Jerry telling the Story, with lot's of pictures of the band with big smiles on their faces!

Nine was never going to be more than a fair album with some great moments, but this expanded version of Fairport Convention's ninth album is superior to the original edition, the bonus tracks all adding a measure of excitement and energy that was lacking in long stretches of that original. The nine core tracks still have the same problems of inconsistency that one found on hearing them in the '70s, the group showing extraordinary virtuosity and musical instincts on folk-based tracks such as "The Hexamshire Lass" and "The Brilliancy Medley & Cherokee Shuffle," but lacking inspiration on "Polly on the Shore" and "To Althea from Prison." On the latter songs, the band supplied the music to traditional lyrics, and they simply fall flat – it isn't even that the playing is bad, so much as that the failed numbers are uniformly lugubrious in the way they're treated. Part of the problem lies with the fact that while Trevor Lucas and Jerry Donahue were good guitarists, they weren't terribly interesting – where Richard Thompson always came up with something surprising and unexpected on Fairport's songs, Lucas and Donahue stick with fairly routine pop music sounds, more in keeping with the Eagles (and the later Eagles at that) than the group that recorded Liege & Lief, Full House, and House Full. Lucas' "Bring 'Em Down" is a decent song, with some strong singing and playing by the composer and a lovely and powerful fiddle solo by Swarbrick, but it overstays its welcome and loses its cohesion – "Sloth" it is not. Too much of the album is taken up by easily forgotten contemporary-style rockers like "Big William" and throwaways such as the countrified "Pleasure and Pain"; not even the upbeat, riff-heavy "Possibly Parsons Green" makes up for this problem. [The German bonus tracks, on the other hand, counterbalance the weaker moments among the original nine songs – "The Devil in the Kitchen" is a superb virtuoso fiddle showcase, and the three live tracks that follow, recorded live in London on April 23, 1973; "Pleasure and Pain" fares somewhat better than it did as a studio cut, but the real treats here are "George Jackson" and "Six Days on the Road," which show a looser, freer (and more valid and accurate) version of this band at work. They might not be the kind of material that Fairport fans are necessarily buying the group's CDs to hear, but they liven up and pretty much punch up the proceedings so well that they're a very good reason – along with remastered sound and extensive notes by Jerry Donahue – for upgrading one's version of Nine.] 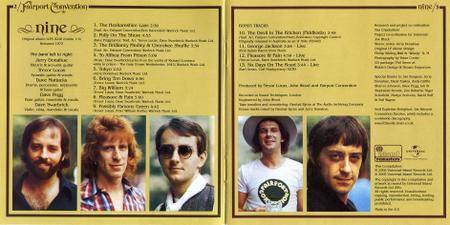 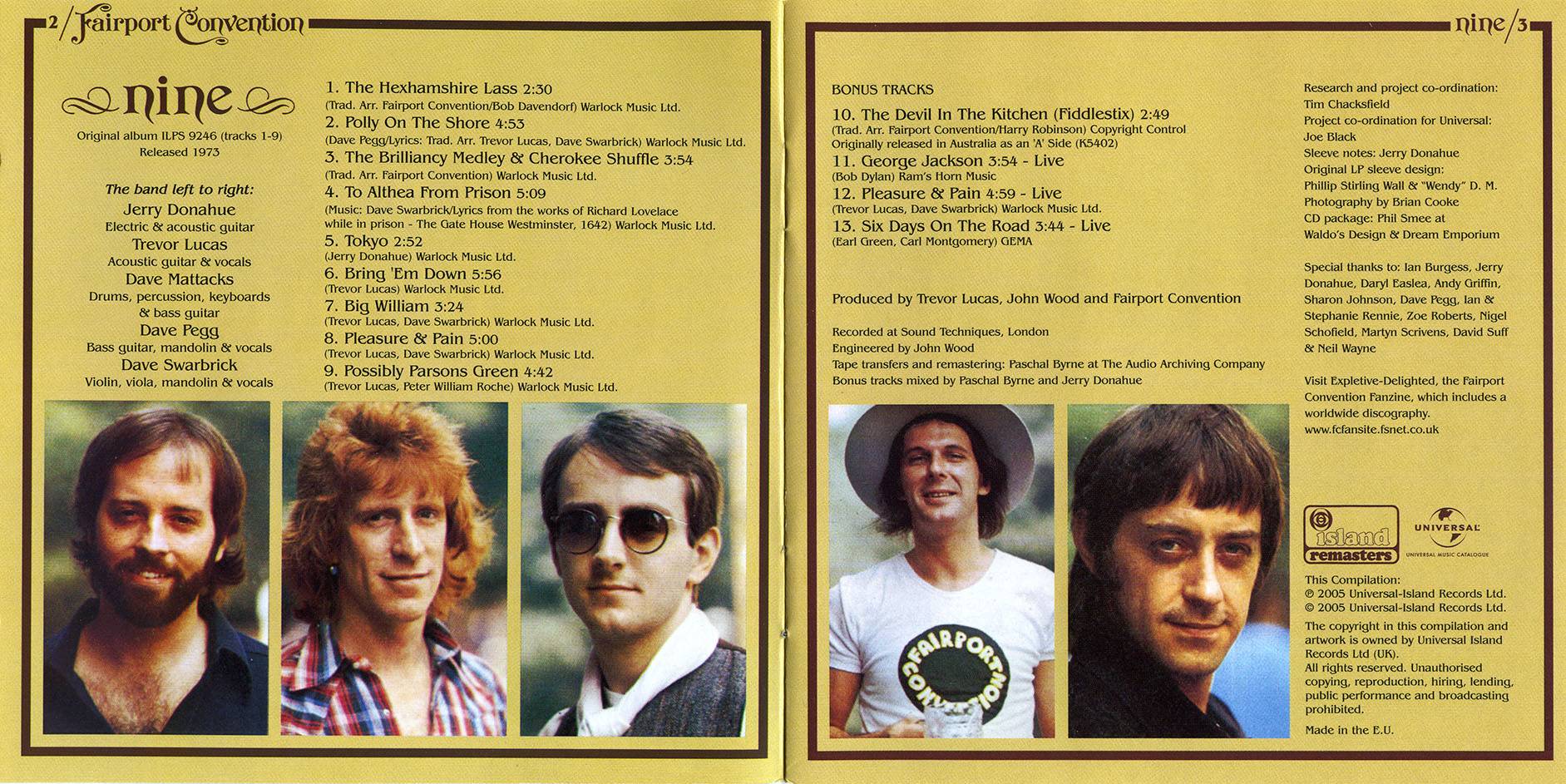 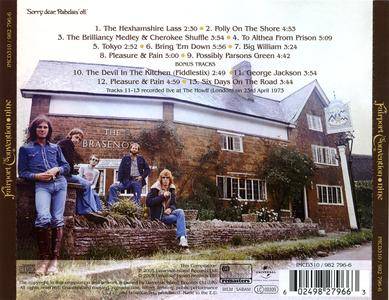 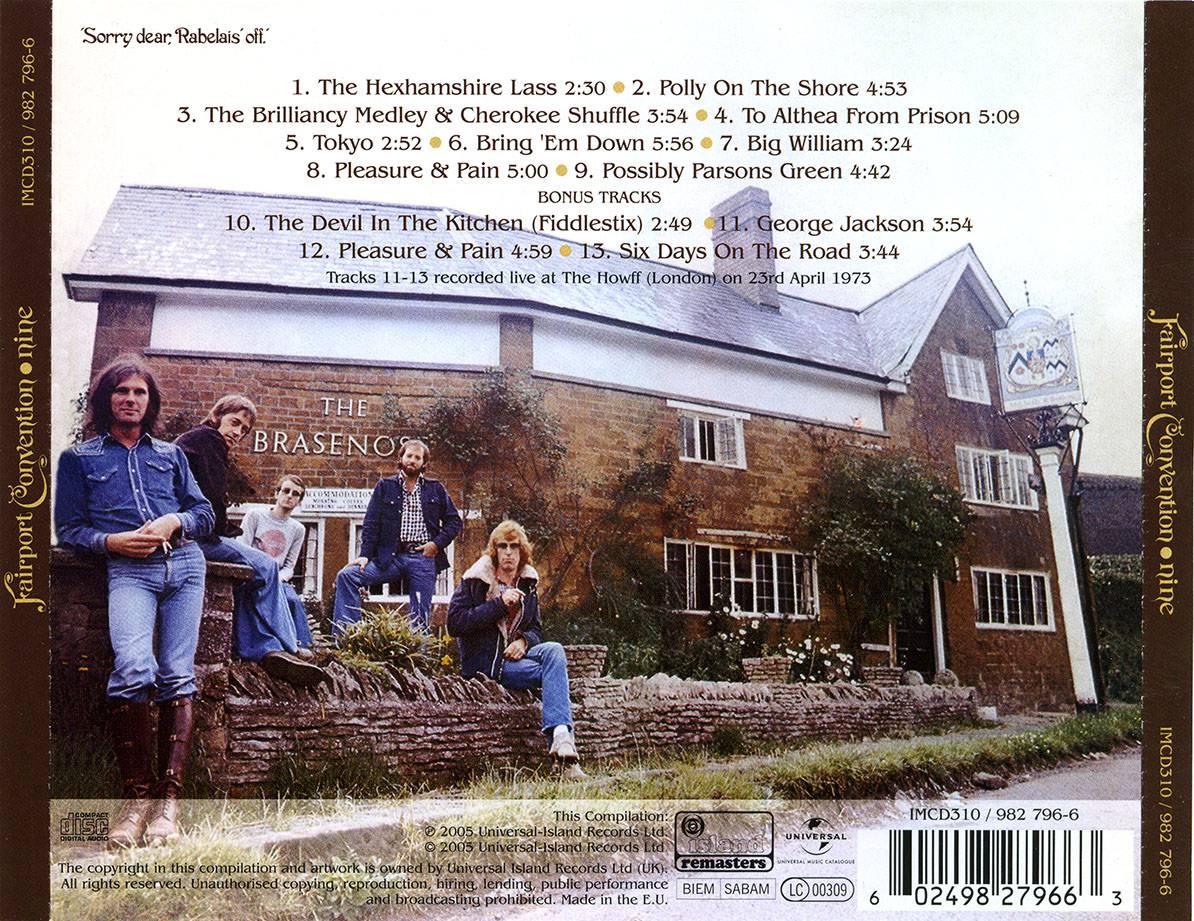 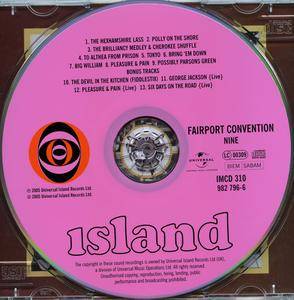 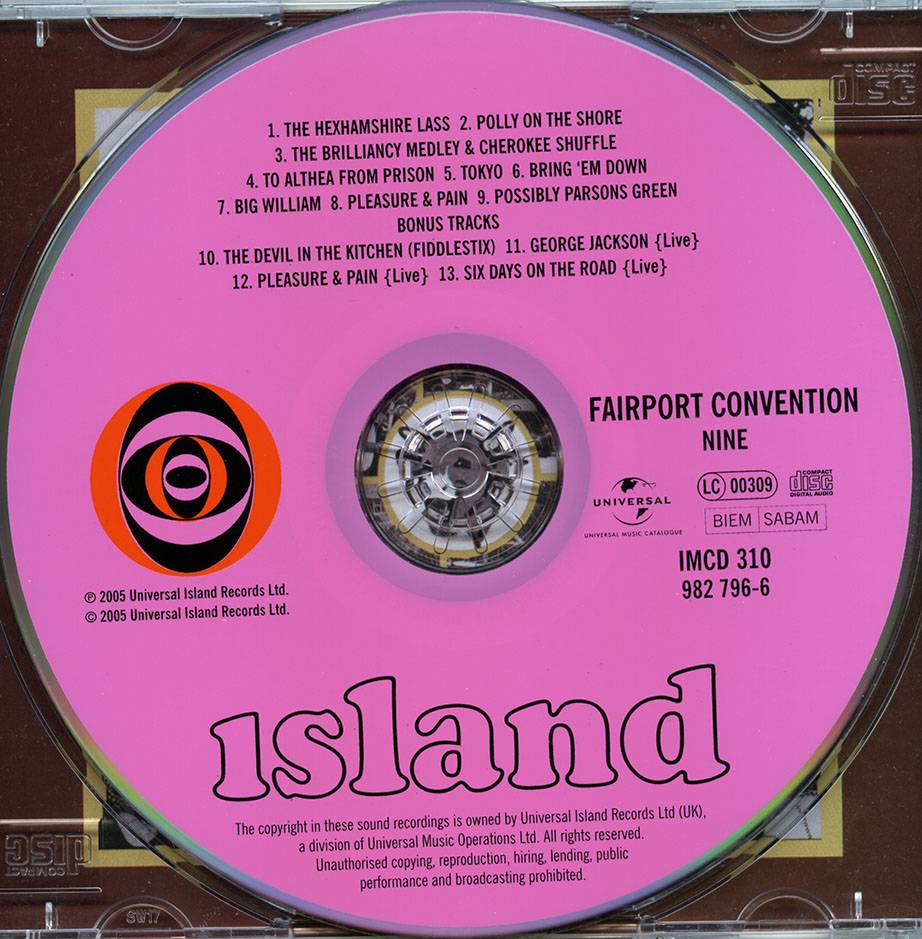 All thanks to original releaser - Swamp Fox

More interesting music in My Blog